Something new under the sun--Longitudinal Direct Coupled Amplifier

Vacuum tubes have been invented for nearly 100 years. Honestly all possible circuits configurations are almost exhausted. About fifteen years ago, following the rise of internet, there used to be an electronics Periodical called theTube CAD Journal where many innovative circuits were published. Tube CAD Journal seems to cease publishing since 2003. Around the same time period another paper based Periodical, the Vacuum Tube Valley, stopped publishing after the chair editor Charlie Kittleson passed away. There were a total of 20 issues of Vacuum Tube Valley with good materials on vacuum tube circuits. Since then it was really quiet. That's why my eyes were wide-open when I see the Longitudinal Direct Couple Amplifier. In the rest of the article I use the acronym LDCA to represent the name of this circuit. 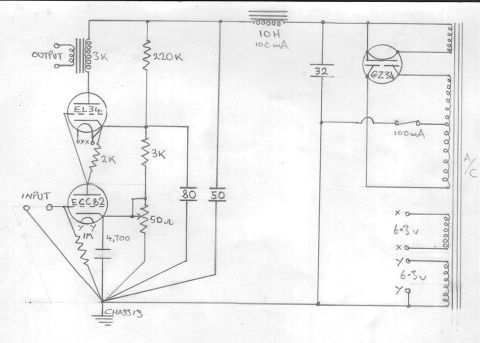 This circuit was published by Chris Strickland at the Vacuum Tube Amplifier group of facebook. The tubes used are an ECC82 (12AU7equivelent) and a triode-connected EL34. It immediately attracted many discussions.  In the discussions other people such as Jeremy Epstein expressed the circuit or similar ones were already used by many people as early as 1999. Jeremy mentioned his article in 2001. Interested readers can find it in the following link:  http://home.earthlink.net/~jeremyepstein/freelunch.html

Chris Strickland claimed to be the original author of this circuit, and according to him this circuit has the following advantages: direct coupled, high slew rate,simple and stable. Chris also expressed this circuit as a combination of Cascode and Cascade. Sounds too good to be true? Well, let's find out the detail of this circuit step by step. For convenience I redraw the circuit using free version of ORCAD and number each component. I replace the transformer with an inductor and selected a B+ voltage I think reasonable because Chris didn't provide the voltage in his original drawing. 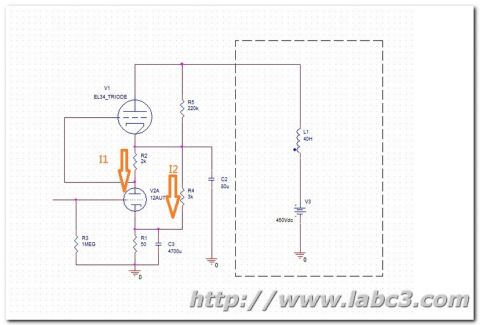 LDCA redrawn with number parts. The parts enclosed by the dashed-line can be ignored for our purpose

The word "Longitudinal" used for this circuit, I guess, comes from the fact that the two tubes are stacked. The power tube sit on top of the small signal tube and hence the signal coupling path is longitudinal. At first glance the circuit seems to be very wrong. Usually the idle current is relatively high (~60 to 80mA) for a power tube compared to a small signal tube (~10mA). If someone stack them then either the power tube is under-current or the small signal tube is over-current. A close look reveals how the above problem is non-exist with a fixed resistor R4 and a potentiometer R1 (replaced by a fixed resistor in the schematics). These two resistors cleverly guide the idle current of EL34 into the cathode resistor of ECC82 instead through it's plate. This configuration avoid the aforementioned over-current problem. And the idle current of  EL34 is the sum of I1 and I2 as shown in the figure above. 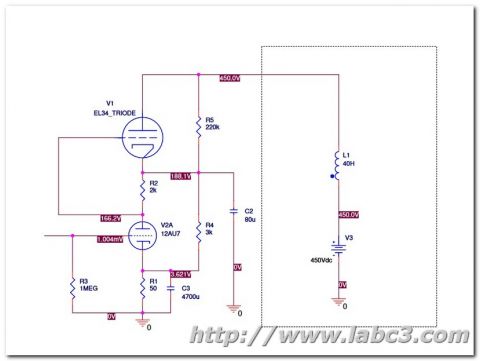 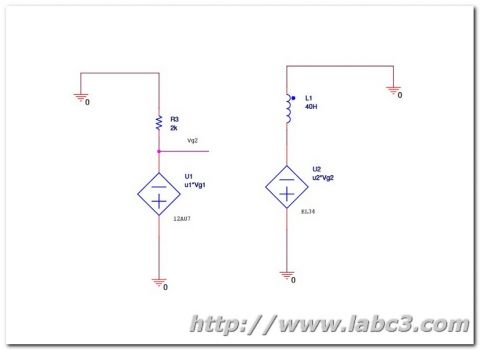 As a comparison, the following figures show a common-cathode capacitor-coupled circuit and it's small-signal model using the same tubes: 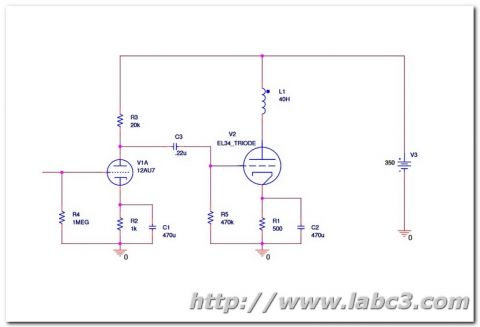 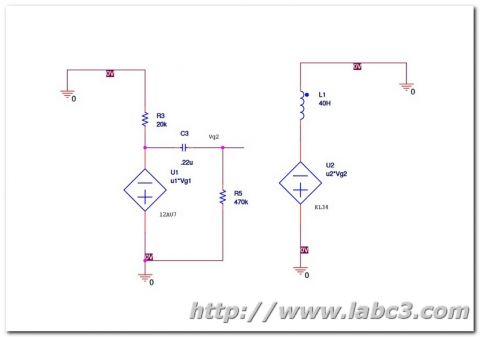 Observing the two small-signal models above we can easily find that they are basically the same except one coupling capacitor. In other words, the frequency response of LDCA is the same as the traditional common-cathode amplifiers. It is not an common-gate amplifier that has a reduced Miller-capacitance and hence it doesn't share the property of extended frequency response. 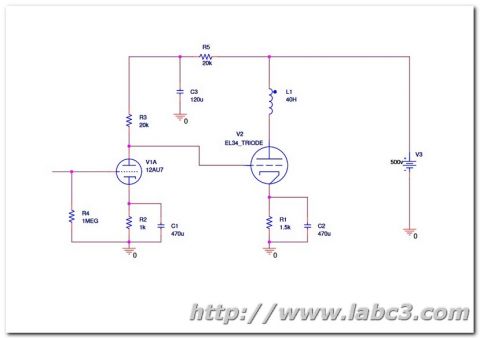 Description over of Loftin-White circuit

In that case, let's check if LDCA uses fewer components as Chris claimed. Let's count: hmm... pretty much the same. Maybe LDCA has one less resistor because R2 is shared as a load resistor for ECC82 and as a bias resistor for EL34. Some components might have different voltage or wattage rating but the difference is not significant.

Ok, is there any drawback with LDCA? In my humble opinion there are plenty drawbacks. The most dominant problem is that the selection for the tubes combinations is very limited. From the small signal model we learned that in a LDCA both tubes are operated under a common-cathode configuration. Hence the common practice of bias point selection applies to it. First we decide the bias point from the datasheets' I-V curve, then we select the supply voltage according to this bias point and a plate load resistance. In the LDCA circuit the role of R2 is both a plate-load resistor for ECC82 and a bias resistor for EL34. It looks elegant but in reality it causes a dilemma. For example, A triode-connected EL34 only needs around 25V to 30V bias due to it's high mu. But this voltage can only supply around 2k Ohms plate load for the ECC82 with an idle current of 10 mA. This value is far below the internal resistance of a ECC82 which is around 7k Ohms and causes a very vertical load line. The result of it is reduced output voltage swing and a higher distortion. We can select power tubes with a lower mu to increase the voltage drop on R2. For example those directly heated triodes. For example 300B has a bias voltage of 60V to 70V. For 50 it's around 80V. But even with these tubes the load resistances are still not efficient. This is the major drawback of LDCA in my opinion.

A consequence of the above limitation is that the output voltage swing is limited by the bias voltage of the EL34 and it can not reach a voltage swing the EL34 needs to output at full capability unless the impedance of R2 is infinitely large. In the discussions at facebook someone mentioned replacing R2 by an inductor. Even with an inductor with an infinite inductance the voltage swing is just enough with no margin. In reality there is no such inductor with an infinite inductance and hence it usually needs a resistor connected in parallel to flatten the frequency response. This reduce the effective impedance significantly.

Chris said he doesn't care about the output power and an optimum work-point can be reached by tuning R3. My point of view is: This circuit does generate output. And indeed an optimal work-point might exist for it. But this optimum is mostly likely a compromise. In the optimization theory we called it a local maximum. What we are searching is a global-maximum. In a much wider solution space I don't think it's a good idea to confine ourselves in so tight a cell.

You guys probably know what I think about LDCA. This is an interesting and innovative circuit. Unfortunately it doesn't solve the problems it claims to solve. On the contrary it creates more problems. The output power of a single-end amplifier is small already. I don't see much point to cut the output even further. If I need to choose between a LDCA and a Loftin-White, my vote goes to Loftin-White.

It's the best sounding amp I've ever heard. the whole point of the circuit is that it is low power, which doesn't stress any of the components. If you want more power, you just parallel the tubes.

Build it and listen, before you criticise.
Reply
# 站長Chris Chang 2016-06-06 14:16
Hi Ash, thanks for your comment. At first I was very excited about this circuit. But like I said I can not accept the shortcoming of it. Life is all about choices. I don't want to get into the discussion on how it sounds because it's too personal. I don't see why you think this circuit is less stressful than a Loftin-White. It is class A so it consume the highest power when there is no output. And I don't see a reason you can't lower the supply voltage for a Loft-White if you want to "stress" the components less.
Reply
Refresh comments list
RSS feed for comments to this post
Add comment
JComments